By Education Library on December 2, 2020

Featured new children’s books for the month of December.  Click on the book cover or title to take you to the UBC Library catalogue record for the item. 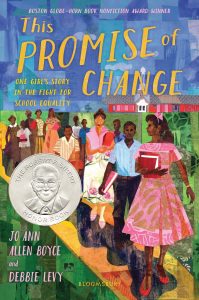 This promise of change: one girl’s story in the fight for school equality
Jo Ann Allen Boyce and Debbie Levy
F444.C68 B69 2019

In 1956, one year before federal troops escorted the Little Rock 9 into Central High School, fourteen-year-old Jo Ann Allen was one of twelve African-American students who broke the colour barrier and integrated Clinton High School in Tennessee. At first, things went smoothly for the Clinton 12, but then outside agitators interfered, pitting the townspeople against one another. Uneasiness turned into anger, and even the Clinton Twelve themselves wondered if the easier thing to do would be to go back to their old school. Jo Ann–clear-eyed, practical, tolerant, and popular among both black and white students–found herself called on as the spokesperson of the group. But what about just being a regular teen? This is the heartbreaking and relatable story of her four months thrust into the national spotlight and as a trailblazer in history. Based on original research and interviews and featuring backmatter with archival materials and notes from the authors on the co-writing process.
. 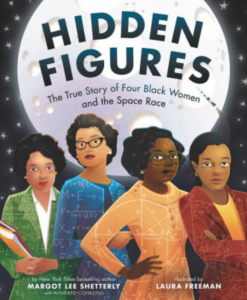 Explores the previously uncelebrated but pivotal contributions of NASA’s African American women mathematicians to America’s space program, describing how Jim Crow laws segregated them despite their groundbreaking successes. Includes biographies on Dorothy Jackson Vaughan (1910-2008), Mary Winston Jackson (1921-2005), Katherine Colman Goble Johnson (1918- ), Dr. Christine Mann Darden (1942- ).
Katherine, Dorothy, Mary, and Christine were all good at math. Really good. And it was their understanding of numbers that helped them do what seemed impossible. They were women, and they were African-American, and they lived during a time when being black and a woman limited what they could do. But Katherine, Dorothy, Mary, and Christine were hardworking and persistent and, most important, smart. And that’s why NASA hired them to do the math that would one day send the United States into space for the very first time. New York Times bestselling author Margot Lee Shetterly and illustrator Laura Freeman bring to life the inspiring story of the struggles of these four “hidden figures” and what they overcame to succeed. The math work they did would change not only their own lives, but the face of air and space travel forever. 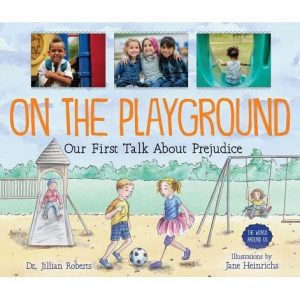 On the Playground: Our First Talk About Prejudice focuses on introducing children to the complex topic of prejudice. Crafted around a narrative between a grade-school-aged child and an adult, this inquiry-focused book will help children shape their understanding of diversity so they are better prepared to understand, and question, prejudice witnessed around them in their day-to-day lives and in the media. Dr. Jillian Roberts discusses types of discrimination children notice, what prejudice means, why it’s not okay, how to stand up against it and how kids can spread a message of inclusion and acceptance in the world around them.