By Education Library on February 1, 2022

As we enter into the month of February, please enjoy browsing this selection of children’s books and teacher resources in celebration of Black History Month.

These books and more are all on display at the UBC Education Library Collection Spotlight area on our main floor breezeway.

Tells the story of Viola Desmond, an African Canadian woman who, in 1946, challenged a Nova Scotia movie theater’s segregation policy by refusing to move from her seat to an upstairs section designated for use by blacks.

“Jody Nyasha Warner and Richard Rudnicki’s rendering of Desmond’s tale is a wonderful marriage of text and image. Warner uses a warm oral storytelling voice that invites the reader to “come on here, listen in close” to the tale of a woman who “sat down for her rights.” Rudnicki’s bright illustrations capture the changing emotions on Viola’s face while supplying details of architecture and fashion that bring the period vividly to life.” Quill & Quire

Meet the youngest known child to be arrested for a civil rights protest in Birmingham, Alabama, 1963, in this picture book that proves you’re never too little to make a difference. Nine-year-old Audrey Faye Hendricks intended to go places and do things like anybody else. So when she heard grown-ups talk about wiping out Birmingham’s segregation laws, she spoke up. As she listened to the preacher’s words, smooth as glass, she sat up tall. And when she heard the plan — picket those white stores! March to protest those unfair laws! Fill the jails! — she stepped right up and said, I’ll do it! She was going to j-a-a-il! 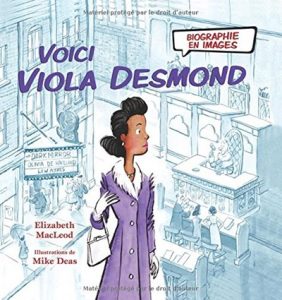 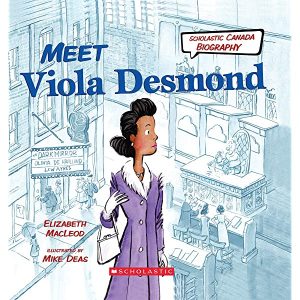 On the night of November 8th 1946, Nova Scotia businesswoman Viola Desmond stood up for her right to be in the “unofficial” whites-only section of a New Glasgow movie theatre. and was arrested for it. Supported by the Nova Scotia Association for the Advancement of Coloured People (NSCAACP) and the black-owned newspaper The Clarion, Viola took her quest for the right to freedom from discrimination to the courts. While she ultimately did not succeed, she was a beacon to other early civil-rights activists. Her sister Wanda worked hard to promote Viola’s legacy, which has been finally honoured by Viola’s inclusion on the new Canadian $10 bill. 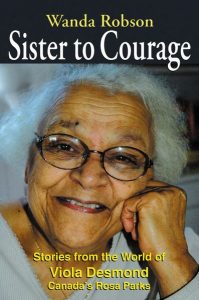 In Sister to Courage, Wanda takes us inside the world she shared with Viola and ten other brothers and sisters. Through touching and often hilarious stories, she traces the roots of courage and ambition, god fun and dignity, of the household that produced Viola Desmond.

Tough and compassionate, Viola shines through beyond the moment she was carried out of Roseland movie theatre for refusing to sit I the blacks-only section. Viola emerges as a defender of family and a successful entrepreneur whose momentum was blocked by racism. 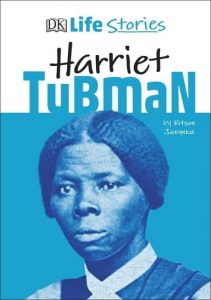 In this kids’ biography, discover the inspiring story of Harriet Tubman, a fearless activist and abolitionist who helped free many slaves.

Born into slavery in c.1820, Harriet Tubman would later run away and help scores of other African American slaves escape to freedom in the North using the “Underground Railroad.” A nurse, scout, and advisor during the American Civil War, Harriet co-led the Combahee River Raid, in which 700 slaves were liberated. After the war, Harriet became involved in women’s suffrage, or the right to vote, and opened a retirement home for sick and elderly African Americans. In this biography book for 8-11 year olds, learn all about Harriet Tubman’s fascinating life, the hardships she endured, her visions, the people she helped and rescued, the battles she fought, and how this American icon of justice and strength continues to inspire so many people today.

Born in the United States and enslaved as a child, Harriet Tubman (circa 1820-1913) is one of the best-known figures connected to the Underground Railroad. Through her knowledge and outdoor survival skills, honed through her unpaid labour in the fields and through the later connections she made in the abolitionist community, Tubman was well poised to command her followers. By her discipline and example, she never lost a “passenger.”

Tubman’s exploits helped to empower those opposed to slavery and enrage those who supported it. Her success encouraged enslaved Africans to make the brave break for freedom and reinforced the belief held by abolitionists in the potential of black freedom and independence. Referred to as “General Tubman” due to her contributions to the Underground Railroad and to the Union Army, Tubman’s numerous rescue missions ending in Canada helped to build the interest in escape and reinforce the position of Canada as the final stop on the journey to freedom. 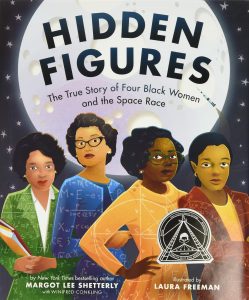 Explores the previously uncelebrated but pivotal contributions of NASA’s African American women mathematicians to America’s space program, describing how Jim Crow laws segregated them despite their groundbreaking successes. Includes biographies on Dorothy Jackson Vaughan (1910-2008), Mary Winston Jackson (1921-2005), Katherine Colman Goble Johnson (1918- ), Dr. Christine Mann Darden (1942- ).
Katherine, Dorothy, Mary, and Christine were all good at math. Really good. And it was their understanding of numbers that helped them do what seemed impossible. They were women, and they were African-American, and they lived during a time when being black and a woman limited what they could do. But Katherine, Dorothy, Mary, and Christine were hardworking and persistent and, most important, smart. And that’s why NASA hired them to do the math that would one day send the United States into space for the very first time. New York Times bestselling author Margot Lee Shetterly and illustrator Laura Freeman bring to life the inspiring story of the struggles of these four “hidden figures” and what they overcame to succeed. The math work they did would change not only their own lives, but the face of air and space travel forever. — From dust jacket.

On August 28, 1963, Martin Luther King, Jr. gave his famous “I Have a Dream” speech from the steps of the Lincoln Memorial, and his strong voice and powerful message were joined and lifted in song by world-renowned gospel singer Mahalia Jackson. It was a moment that changed the course of history and is imprinted in minds forever. Told through Andrea Davis Pinkney’s poetic prose and Brian Pinkney’s evocative illustration, the stories of these two powerful voices and lives are told side-by-side — as they would one day walk — following the journey from their youth to a culmination at this historical event when they united as one and inspiring kids to find their own voices and speak up for what is right. 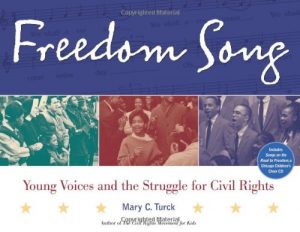 Melding memorable music and inspiring history, Freedom Song presents a fresh perspective on the civil rights movement by showing how songs of hope, faith, and freedom strengthened the movement and served as its voice.

In this eye-opening account, you’ll discover how churches and other groups–from the SNCC Freedom Singers to the Chicago Children’s Choir–transformed music both religious and secular into electrifying anthems that furthered the struggle for civil rights.

Walking many miles to school in the dusty road, young Coretta knew, too well, the unfairness of life in the segregated south.

A yearning for equality began to grow.

Together with Martin Luther King, Jr., she gave birth to a vision and a journey—with dreams of freedom for all.

This extraordinary union of poetic text by Ntozake Shange and monumental artwork by Kadir Nelson captures the movement for civil rights in the United States and honors its most elegant inspiration, Coretta Scott.

From the first Black person who came to Canada about 400 years ago to the most recent wave of African immigrants, Black Canadians have played an important role in our country’s history.

In this informative overview, kids will discover the inspiring stories and events of a people who fought oppression as they searched for a place to call their own.

Featuring fact boxes, mini-profiles, a timeline and more, this book in the acclaimed Kids Book of series offers a glimpse into an often-overlooked part of Canadian history. 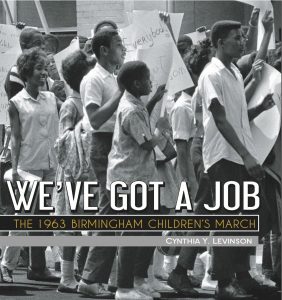 The inspiring story of one of the greatest moments in civil rights history as seen through the eyes of four young people who were at the center of the action.

The 1963 Birmingham Children’s March was a turning point in American history. In the streets of Birmingham, Alabama, the fight for civil rights lay in the hands of children like Audrey Hendricks, Wash Booker, James Stewart, and Arnetta Streeter.
Through the eyes of these four protesters and others who participated, We’ve Got a Job tells the little-known story of the 4,000 black elementary, middle, and high school students who voluntarily went to jail between May 2 and May 11, 1963. The children succeeded – where adults had failed – in desegregating one of the most racially violent cities in America.
By combining in-depth, one-on-one interviews and extensive research, author Cynthia Levinson recreates the events of the Birmingham Children’s March from a new and very personal perspective. 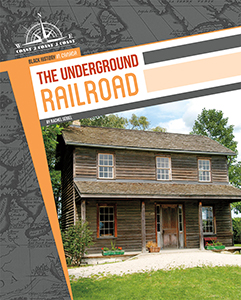 Discusses the development of the Underground Railroad used by escaped slaves to travel north to freedom.

Also discusses the challenges faced by these Black settlers after reaching Canada.

In 1946, a Black Halifax businesswoman, Viola Desmond, was wrongfully arrested for sitting in a white’s-only section of a movie theatre in New Glasgow, Nova Scotia. In 2010, sixty-four years later, the Nova Scotia government recognized this gross miscarriage of justice and posthumously granted her a free pardon. Most Canadians are aware of Rosa Parks, the American civil rights icon who refused to give up her seat on a racially segregated bus in Alabama, but Viola Desmond’s similar act of courage in resisting the practice of racial segregation occurred nine years before this historic event. However, today, even after the Nova Scotia Government’s unprecedented pardon of Desmond, many Canadians are still unaware of her story or that racial segregation existed throughout many parts of Canada during most of the twentieth century. On the subject of race, Canadians seem to exhibit a form of collective amnesia. Viola Desmond’s Canada is a groundbreaking book aimed at providing both general readers and students of Canadian history with a concise overview of the narrative of the Black experience in Canada. The book traces this narrative from slavery under French and British rule in the eighteenth century to the practice of racial segregation and the fight for racial equality in the twentieth century. Included are personal recollections by Wanda Robson, Viola Desmond’s youngest sister, together with important but previously unpublished documents and other primary sources in the history of Blacks in Canada

• I have a dream: writings and speeches that changed the world
Martin Luther King, Jr.; foreword by Coretta Scott King; edited by James Melvin Washington.
E185.97.K5 A25 1992

On August 28, 1963, Martin Luther King Jr. stood in front of the Lincoln Memorial looking out over thousands of troubled Americans who had gathered in the name of civil rights and uttered his now famous words, “I have a dream . . .” It was a speech that changed the course of history.

This anniversary edition honors Martin Luther King Jr.’s courageous dream and his immeasurable contribution by presenting his most memorable words in a concise and convenient edition. As Coretta Scott King says in her foreword, “This collection includes many of what I consider to be my husband’s most important writings and orations.” In addition to the famed keynote address of the 1963 march on Washington, the renowned civil rights leader’s most influential words included here are the “Letter from a Birmingham Jail,” the essay “Pilgrimage to Nonviolence,” and his last sermon, “I See the Promised Land,” preached the day before he was assassinated.

Editor James M. Washington arranged the selections chronologically, providing headnotes for each selection that give a running history of the civil rights movement and related events. In his introduction, Washington assesses King’s times and significance.