June is National Indigenous History Month. Click on the book cover or title to take you to the UBC Library catalogue record for the item.

Grades: K-12. Educator Sara Florence Davidson saw how the Haida tradition of the potlatch – which she learned from her father, renowned artist Robert Davidson – could be integrated into contemporary educational practices. In this book, father and daughter present a model for learning that is holistic, relational, practical, and continuous.

“Author Jennifer Katz weaves together methods of creating schools that engender mental, spiritual, and emotional health while developing intellectual thought and critical analysis. Expert Kevin Lamoureux contributes his wisdom regarding Indigenous approaches to mental and spiritual health that benefits all students and addresses the TRC calls to action. Katz provides examples of flourishing learning communities that can serve as models for effective growth and change, and describes the roles of students, families, staff, teachers, and administration.”

Aboriginal worldviews and perspectives in the classroom: moving forward
BC Ministry of Education
E96.65.B6 A26 2015a

Grades: K-12. This resource is designed to answer a number of questions, including what is meant by Aboriginal education and by Aboriginal worldviews and perspectives; what is required of teachers and of the education system in order to provide appropriate and authentic teaching in line with the First Peoples Principles of Learning; and where teachers can turn for guidance and support in modifying their practice to incorporate new content and approaches.

Culturally Relevant Aboriginal Education provides teacher candidates and in-service teachers with relevant information to help them integrate Aboriginal, First Nations, Metis, and Inuit content, customs, and traditions into the classroom, providing students with a broader perspective of Canada and its population. 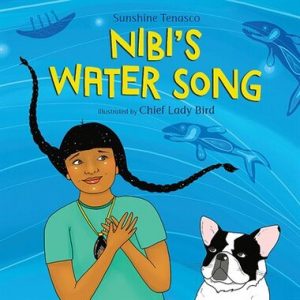 “Nibi is an Indigenous girl on the search for clean water to drink. Though she is faced with repeated obstacles, Nibi’s joyful and determined energy becomes a catalyst for change and action as her community, and in widening circles, the country and government rally around her to make clean drinking water available for all. There is a strong underlying message that even when a problem seems too large to face, every bit that everyone does help. And inaction is not an option.” 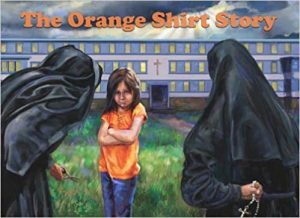 “This is the true story of a little girl and her very important orange shirt. Six-year-old Phyllis Webstad was as excited to wear her shiny new orange shirt as she was to attend school for the first time. But her first day at the St. Joseph Mission near Williams Lake, BC was nothing like she expected. Her orange shirt was taken away from her, never to be returned.”/. 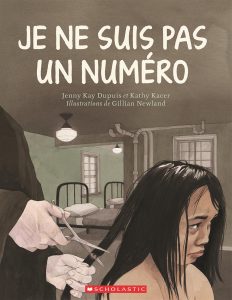 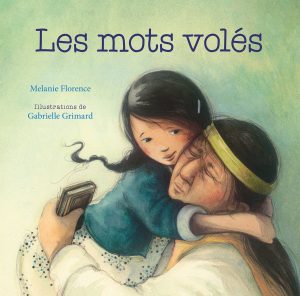 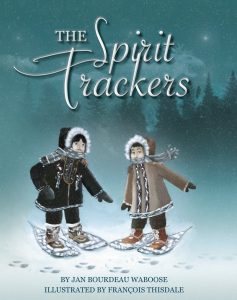 “Native telling of the Windigo, the Night Spirit of Winter, told by an uncle elder to two Aboriginal cousins, and the tracking of the feared creature into the forest. This illustrated story is populated with raven, moose and other forest animals, the Spirit Moon and a cold winter night; a heartwarming story of family, love, togetherness and respect for the environment.”. 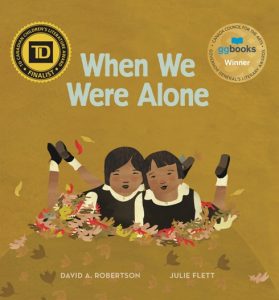 “When a young girl helps tend to her grandmother’s garden, she begins to notice things that make her curious. Why does her grandmother have long, braided hair and beautifully colored clothing? Why does she speak another language and spend so much time with her family? As she asks her grandmother about these things, she is told about life in a residential school a long time ago, where all of these things were taken away. When We Were Alone is a story about a difficult time in history, and, ultimately, one of empowerment and strength.”. 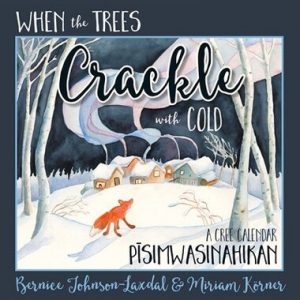 “The bear sleeping safely in her den, kohkom telling a story by the fire, the trees crackling with cold–we are all connected to the seasons and the cycle of nature. The calming rhythm of the words echoes the rhythm of the land in this timeless picture book about the moon calendar of the northern Cree. Its warmly rendered watercolour illustrations bring Saskatchewan’s North to life. When the Trees Crackle with Cold is written in English and the northern Plains Cree Y dialect, inviting Cree and non-Cree speakers alike to explore the traditional moon calendar.” 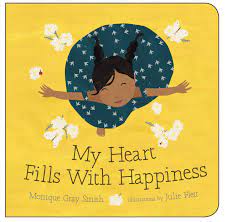 The sun on your face. The smell of warm bannock baking in the oven. Holding the hand of someone you love. What fills your heart with happiness? This beautiful board book, with illustrations from celebrated artist Julie Flett, serves as a reminder for little ones and adults alike to reflect on and cherish the moments in life that bring us joy.

“Cole Harper is dead. Reynold McCabe is alive and free. Mihko Laboratories has reopened the research facility and is working to manufacture and weaponize the virus that previously plagued Wounded Sky. People are dying. The community has been quarantined. And time is running out. What deal did Eva strike with Choch? Who will defeat Reynold and Mihko?”. 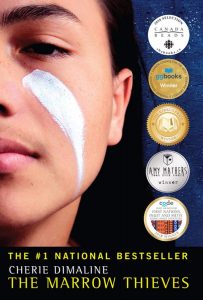 “In a future world ravaged by global warming, people have lost the ability to dream, and the dreamlessness has led to widespread madness. The only people still able to dream are North America’s indigenous population – and it is their marrow that holds the cure for the rest of the world. But getting the marrow – and dreams – means death for the unwilling donors. Driven to flight, a 15-year-old and his companions struggle for survival, attempt to reunite with loved ones, and take refuge from the “recruiters” who seek them out to bring them to the marrow-stealing ‘factories.’.

“Echo Desjardins, a 13-year-old Métis girl adjusting to a new home and school, is struggling with loneliness while separated from her mother. Then an ordinary day in Mr. Bee’s history class turns extraordinary, and Echo’s life will never be the same. During Mr. Bee’s lecture, Echo finds herself transported to another time and place–a bison hunt on the Saskatchewan prairie–and back again to the present. In the following weeks, Echo slips back and forth in time. She visits a Métis camp, travels the old fur-trade routes, and experiences the perilous and bygone era of the Pemmican Wars.”

Juggling soccer, school, friends and family leaves John with little time for anything else. But one day at the local community center, following the sound of drums, he stumbles into an Indigenous dance class. Before he knows what’s happening, John finds himself stumbling through beginner classes with a bunch of little girls, skipping soccer practice and letting his other responsibilities slide. When he attends a pow wow and witnesses a powerful performance, he realizes that he wants to be a dancer more than anything. But the nearest class for boys is at the Native Cultural Center in the city, and he still hasn’t told his family or friends about his new passion. If he wants to dance, he will have to stop hiding. Between the mocking of his teammates and the hostility of the boys in his dance class, John must find a way to balance and embrace both the Irish and Cree sides of his heritage.

“7 Generations follows one Plains Cree family from the early 19th century to the present day. For Edwin, the story of his ancestors from both the distant and recent past must guide him through an uncertain present, to the dawn of a new future. 7 Generations explores the life of Stone, a young Cree warrior, the smallpox epidemic of 1870, the residential school system of the 20th century, and its familial legacy”.